The morning after the disastrous date with Colin, I’d packed quickly after a sleepless night and left a day early for Dallas, wanting to put as much distance as I could between myself and the professor. I’d called Sharon after I was on the road and asked her to feed Miss Priss a day earlier than planned, giving her a hasty goodbye and Merry Christmas. I promised to be back January 30. We’d exchange gifts then.
The heater on my beloved Volvo had stopped working on the pre-Christmas drive to Dallas a week ago, and I had stopped just east of Weatherford to retrieve extra clothes from my suitcase in order not to freeze 90 minutes before reaching Ben and Amanda’s house. I also took the time to wash my face, hoping they wouldn’t notice I’d been crying for the last five hours. Hot coffee, which I hated, helped warm me as well as keep me awake.
“Mom, I’ve been tellin’ you over and over to get rid of this old heap, and now look! You’re frozen!” Ben had chided as he helped me bring my suitcase and bags of brightly wrapped presents into the house.
“Don’t be silly, Ben. I’m fine. I’ll get some hot tea. Bring in the rest of those, will you, and put them under the tree?”
Shaking his head, he returned to the car for a second load. He recognized the huge flat, rectangular package on the bottom, knowing it had to be the portrait of his daughters he had seen at Thanksgiving. It was the reason Maggie had driven — the collage painting was much too big to fit on the plane, and she said she didn’t want to take a chance damaging it during shipping. 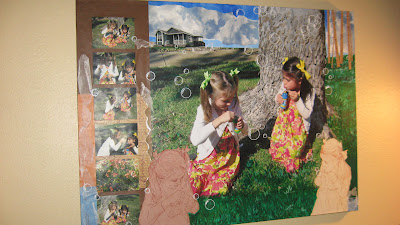 “I’ll take your Volvo in to my mechanic tomorrow,” Ben offered, “although it might not get fixed ... it’s Christmastime, you know!” I had already disappeared into the house and pretended not to hear.
These past few days away from Lubbock, from my heartache, were good for me and I’ve cherished the time with my family. Michael and Karen have flown in, and Ben and Amanda’s home is large enough to hold them all. Today’s traditional turkey dinner, cooked by Amanda with only a little help from me, was delicious, and Ben puffed with pride at his wife’s success as he and Michael cleaned up the dishes afterwards.
Within an hour of my arrival in Dallas, I’d told them I was no longer seeing Colin, and would appreciate it if they wouldn’t ask questions. They started to ask anyway, but “the look” silenced them all. During the entire visit, they respected my privacy, although I could tell all four of them sensed something was terribly wrong and hurt for me. I am trying to be cheerful, honestly!  The distractions of the holidays worked their magic, though, and I fall quickly asleep each night, exhausted by the day’s activities and grateful for family.
By far the best present I’d received today was the news I was to be a grandmother for the third time — Michael and Karen are expecting their first child next summer.
A blessed Christmas to one and all.