Chapter 58
Colin asked to meet for lunch last Monday, but I would see him before that, much to our mutual surprise.
On Monday morning, Elaine answered the 9:30 a.m. call from Boyle’s office. I was wanted down there immediately. That was never good, I knew. He’d really been leaving me alone since I didn’t report to him anymore, and the autonomy I’d had in recent weeks was refreshing. I actually felt like we were moving forward with President Parker’s goals. Whatever could Boyle want now?
Stepping into Boyle’s office, I was surprised to see Colin and Jamie sitting across from the massive desk. I looked at them questioningly, but their shrugs signaled they didn’t know anything either.
“I need a news release posted. That’s why you’re here,” Boyle said without welcome.
“What about?” I asked, sitting in the chair next to Colin and opening my notepad.
“About the tower,” he said exasperatedly.
“We posted one Saturday night about the fire,” I told him. Surely he’d seen it? No, probably not.
“It’s not about that,” Boyle said testily.
“You’ve been up to see the damage?” Colin asked.
“I have not, nor will I ... ever. Chief Callahan sent me photos.”
“You know how the fire started, then?” Colin asked.
“No, I do not ... nor do I care,” he said with an exasperated sigh. “What I do care about is that your organization has damaged this historic building, and I am removing the Saddle Tramps from the tower, permanently. Please turn in your keys.”
We were stunned. Colin was the first us to speak. “You’re not serious?”
“Perfectly serious. Keys, please.”
“But kicking the Saddle Tramps out of the tower? You can’t, Boyle. The tower belongs to the Saddle Tramps. It’s belonged to them for more than half a century!”
He was standing now, as was I. 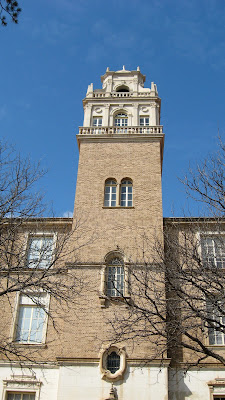 “I don’t care how long it’s belonged to them. It’s a worthless organization. Nothing but a bunch of hypocrites. You will no longer be allowed access. Period. Put your keys on my desk.”
Jamie still sat in stunned silence, a look of such loathing coming over his face that I was afraid he might strike the Chief of Staff. I quickly interceded.
“Mr. Boyle, Chief Callahan thinks it was an arsonist, not the Saddle Tramps who did the damage. Surely, sir, even you wouldn’t take away their rights to their tradition. And what about ringing the victory bells? How will they get up there to do that?”
“They won’t. As of now, the bells in the east tower are silenced.” He looked at Colin. “Maybe when they don’t ring, your stupid organization will remember the fire and the significant costs the university now has to bear to restore it. Also because of the fire, we’ve been instructed by the Lubbock Fire department to extend the fire alarm and sprinklers to both towers, at another small fortune. I need those keys.”
Colin reached in his pocket as he said, “Does President Parker ...”
Boyle stood and looked directly at Colin. “The facilities are under the purview of the Chief of Staff’s office. Are there other keys, Professor Murphy?”
Colin met his stare squarely, barely controlling his anger. “Josh, the sergeant-at-arms has one. I’ll have it sent over this afternoon,” Colin said, giving his key to Boyle. Turning to Jamie, he put out his hand, “Jamie, I’ll need yours, son.”
Jamie stood, keeping his malevolent gaze on Boyle, and threw his tower key on the desk. Turning briskly, he knocked his chair over, then pushed past Colin, and stormed out of the office.
Colin followed him but only after he told Boyle he would fight this decision all the way to the Board of Regents if necessary. I was now alone with Boyle and furious. He sat back down and said to me, “Get a small release sent out saying the change in tradition is a result of the fire. Dismissed.”
I left quickly, not bothering to right Jamie’s chair and silently vowing to do everything I could to help the Saddle Tramps win back their “clubhouse.”
On the way up to my office, I phoned Colin, offering my assistance. He accepted but then begged off from lunch to find and calm Jamie and inform the other Tramps. I called a staff meeting to ask for input. They were as outraged as we were. Ricky suggested a hit man for Boyle, but I gave him “the look” and he mumbled an apology.
It was last night before Colin and I talked again. In the mean time, he’d made a trip to Chicago and I’d made a quick trip to Dallas to see the Virgin Mary unceremoniously drop the Baby Jesus on his head. (He wasn’t hurt, as GloWorm dolls are soft and squishy.)
“We plan to call in a few extremely influential Saddle Tramp alums to speak to the board in January,” Colin said when he called me to confirm our date for next Saturday.
“That might work. I’ll make sure it gets on the agenda then. Also, what do you think about a student protest, or picket line at the Admin Building ... just as the board arrives, or just outside their window. I can get the media out for that, and probably get an op ed piece in the A-J if the boys want to write one. What did President Parker say?” I asked.
“Said he would meet with us after the holidays. Thinks the students should be concentrating on finals this week instead of traditions. I tend to agree with him on that point, but I’m not sure he understands the significance of throwing the most respected campus organization out of a space they’ve had since the 1940s. Maybe we can persuade him to change Boyle’s directive, and then we won’t have to go before the board.”
“Here’s hoping. Now, tell  me, Professor Murphy, where are we going Saturday?”
“Um, a surprise, but wear something you’d wear to a fancy ball or to meet the Queen of England or something,” Colin said. “And no more questions. Understood, Grant?”
Smiling, because I like surprises, I said, “Yes, sir.”
“Good. I’ll pick you up at 7:30. Be hungry.”
So, we’ll see what happens this weekend. Seeing him at the Carol of Lights rekindled my feelings for him, and I know that trying to keep busy will not keep him out of my thoughts. Those green eyes really make my toes curl. I feel like I’m a young girl again! Yippeee...!
Posted by Second Wind at 9:44 PM