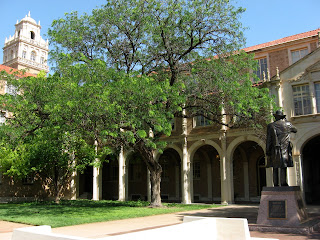 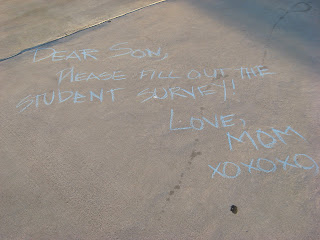 Another sidewalk graffiti said, “Dear Son, Please fill out the  student survey.  Love, Mom XOXOXO.” And another, by Susan; “Dude, you got $400 just laying around somewhere? Fill out the survey!” And my favorite, from Ricky wacky brain, “40,000 pennies for your thoughts!”
It didn’t hurt that the Daily Toreador picked up the story and had a front page photo of  Steven’s hopscotch graffiti the last day of the survey. 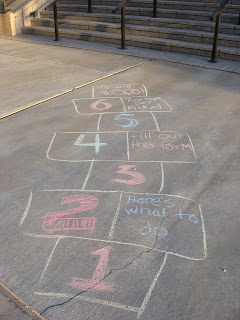 After the two weeks of marketing, Sharon happily reported participation by 82 percent of her engineering students, making it the largest response in the history of the department. Other areas of campus heard about the success, and much to our delight, asked the Communications office for assistance on several different campaigns.
I detailed all this in my weekly e-mail summaries to Boyle, which I knew he never read, and that undoubtedly President Parker never saw. This, of course, was before our move out from under Bennet Boyle’s wicked hand.
Posted by Second Wind at 8:31 PM