Yesterday at church we prayed for rain, again. I can’t believe how awful this drought has been, especially here on Llano Estacado. I read in Financial Times, “The Lone Star state is at the epicenter of a once-in-a-generation drought stretching from Arizona to Florida. the US’s southern underbelly is scorched like meat on a grill.”
We are experiencing small scattered showers tonight, but the temperature was once again over 100 and the same is forecast for the remainder of the week. I am sure the cotton fields are suffering. What did I overhear the other day? Someone said the fields look like wintertime... just dry dirt with no growth. Even the weeds won’t grow in this heat.
We’ll keep praying. What we need is a hurricane that bypasses all the big cities and spreads out over the entire state.
There was a bit of humor in the AJ the other day.. and on the news. Check out this photo below found on the internet and see the website. Some local Lubbockites had some fun with Drought Man.
http://www.KCBD.com/story/15227375/one-lubbock-man-has-found-a-way-to-laugh-off-the-heat 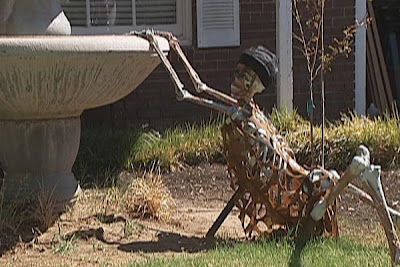 The only good thing that happened this week is Sharon and Doug convinced me to go with them Friday night to the Cactus Theatre downtown. Have I told you about the Cactus Theatre? It's a great place to see local talent. An old movie theatre turned into a live performance theatre.
Friday was a night of Desperado. Toby Caldwell and The Lubbock Texas Rhythm Machine paid tribute to the Eagles album Desperado... played all the songs from start to finish on the album declaring it “The most influential album in county rock history.” I don’t know about that, but we loved it! The same show is each Friday this month, so maybe we’ll go again. Really fun.
Also, next Saturday they are doing a tribute to Patsy Cline. Would love to check that out, too, but I am hopeful that next Saturday I will be moving into my new house! Yipee! I've been out there riding fences for soooo long...
Posted by Second Wind at 9:43 PM