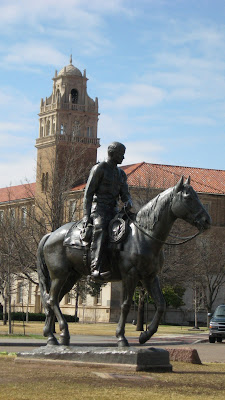 In late July, the Board of Regents announced the sole finalist for the position of president of Texas Tech University, one Phillip Parker, Ph.D., graduate of Dartmouth and the University of Texas, an economics guru. Of the finalists announced earlier, I think he had the best credentials. His last position was as Chief Financial Officer at the University of Illinois.
When the decision was announced, a collective sigh of relief went up from the administration building, no doubt echoed in departments across the university. Boyle is more sullen than usual, and so I have tried to stay out of his way. Thankfully, we won’t be changing the website’s home page as directed, and Boyle hasn't mentioned it again.
I had hoped the new president might be Catholic and fall under Monsignor Fitz’s influence so I might have at least some access, but no luck there. He is reportedly Methodist. He is also the first African-American president at Tech — definitely an anomaly in this part of the country.
Although my group handled the news releases about his selection and arrival, I have yet to meet him. And even though my staff has sent Boyle a detailed outline of suggestions for introductions to the staff, students and community, we have heard nothing in return. The plan included an interview with the Daily Toreador student newspaper during Dr. Parker’s first week and then guest editorials in the Lubbock Avalanche Journal, as well as appearances at as many campus activities as he can fit into his schedule. The Faculty Senate, the Alumni Association and the department chairs should be visited as soon as possible.
We’d suggested the president’s office contact various local civic clubs, the mayor’s office, the University Medical Center administrators and the student body president, as well as the presidents of all active student organizations. The Lubbock public radio station would welcome him as a guest for a lengthy interview program. Communications would be pleased to work with him to write a series of articles for our Insight employee newsletter on his mission and goals. Different student organizations could place ads in the school paper to welcome him. And it certainly wouldn’t hurt to frequent local restaurants and introduce himself.
Unfortunately, he didn’t seem to be using any of those ideas. I wonder if he’s even seen the plan because he isn’t marketing himself at all. I am afraid he won’t last long without a good exposure plan.
But I know better than to bring it up to Bennett Boyle. There isn’t much more I can do except wait and hope for the best. Luckily, it wasn’t all I had to think about last week.
“Are you free Saturday morning? I found some vintage curtains I think will look good in here, but I wanted to get your opinion.” I had brought Sharon over to the new house late Sunday after I’d picked them up at the airport and deposited Doug and the luggage at the Nest.
“I haven’t been home from Italy a full day yet and already you’re dragging me out shopping!” Sharon exclaimed. “Okay, but only if you’ll tell me when I get to meet this beau of yours.”
“He’s not my beau,” I said, maybe a little too defensively. “He’s a friend. But he’s promised to help me move in, so you can meet him then if you promise to behave yourself.”
“When you move in? That’s another two weeks away. We could double date before then, couldn’t we?”
“No. We’re not dating ... we’re just friends. And besides, I’m too busy to go out.”
“Well, then I guess I’ll just have to wait. But speaking of this house you’re renovating, Maggie,” Sharon said, moving from room to room, admiring the work, “it’s really the most charmingly house I’ve seen in the entire town. You’ve done so much while we were gone! It really suits you so well. I never did think you were a traditionalist like your home in Dallas. This house is definitely the old Maggie. You feeding the cat yet?”
“What? No, I’m not feeding the cat! But she still won’t go away. Though I am getting worried about her. I think she looks a little thin.”
“Where is she?”
“I haven’t seen her this evening. She could be anywhere.”
“Well, she’s probably already devoured the entire neighborhood’s mouse population. If she comes around as much as you say, Maggie, I think she’s looking for a new home. You should feed her.”
“Not until I find out where she came from. Surely she lives around here somewhere. I checked with Miss Frances, and she’d never seen her before. I’ll ask around and maybe put up a flier or something near the park. Will that satisfy you?”
“Yes, but I can hardly wait to meet them both.”
“Both?”
“Yes. Your new cat and your new beau.”
“Friend,” I said quickly. “He’s my friend.”
“Yeah, Maggie, and I’m a monkey’s uncle.”
Posted by Second Wind at 12:04 PM