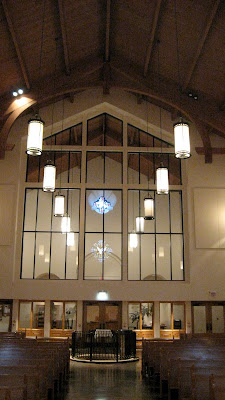 Chapter 33
At Mass yesterday morning, I ran into Fern in the vestibule, accompanied by a tall man with a crew cut. He looked familiar, but I couldn’t immediately place him. Must be Fern’s husband, I thought, the way he’s holding her hand. How sweet.
“Maggie, my friend,” Fern said. “Let me introduce you to my better half. Russell, this is Margaret Grant, the creative lady I told you about who did such wonderful crafts for the children earlier this summer. Maggie, this is Russell, my husband of too many years to count.”
I smiled at the tall man in the western suit with bolo tie, desperately trying to place him. He was so familiar! Where??? Shaking his hand, I said, “Pleased to meet you, Mr ...” What was Fern’s last name? Did I ever know?
“Russell Arbuckle, Mrs. Grant. And I’ve seen you at Tech regents meetings.”
“Of course, Mr. Arbuckle!” I said with sudden recognition. “You’re a regent. I hadn’t realized ... Oh, and you’re the generous donor for the Wind Museum.” I looked accusingly at a smugly smiling Fern, I said, “You keep things close to the vest, don’t you!” Looking back at Mr. Arbuckle, hoping I’d recovered my manners quickly enough, “But how nice to finally meet you.”
Fern was so unpretentious, and yet they were probably the wealthiest family on the South Plains, if not in most of Texas. Amazing.
Russell smiled and said, “I’ve heard good things from my Fernie about you, and from Monsignor Fitz. And Winston Whitaker thinks you’re quite a smart woman. We ’preciate your sending Steven out to interview me about the museum gift. He did some nice stories.”
“It was our pleasure, Mr. Arbuckle,” I said, smiling. Then searching their faces, I tentatively asked, “I, um, I thought the article said your wife’s name was Dorthea?”
Fern smiled, but it was Russ who answered. “It is. Dorthea Fern Cavenaugh Arbuckle. But we’re not that formal around these here parts. Fern is what everyone calls her and Russ is what everyone calls me, so please, no Mr. Arbuckle, if you don’t mind. Just makes me feel old!” he said with a wink. I remembered Steven’s article said he was 83, his wife 77.
“Thank you, Russ. And I’m Maggie.”
“And we’ll be late if we don’t go in pretty soon,” Fern said. “Monsignor likes to start on time, or is it Father Murphy today? Isn’t he the best homilist? Just love his interpretations of scriptures. Oh, Maggie, we’re starting another round of Bible study at the house this fall, after Labor Day and you’re welcome to join us. I’ll let you know the details, but we really must go in now, Russ, darling. See you later, Maggie.”
“Yes, see you later, Fern. Nice to meet you Russ.”
It was Father Murphy who celebrated that particular Mass, and once again I lost myself in his thought-provoking sermon. Lately, I’d given fleeting thought to trying to attend the earlier Mass so I might see Colin — he was an early morning person, he’d said, and liked attending as the sun came up — but I think it might be too forward, since the 10 a.m. service is my normal routine.
Besides, after the physical work of the previous day, I was surprised I’d made it up in time for even this mid-morning service. I’d planned to spend the rest of the day unpacking a few more boxes, especially in the kitchen so I could start cooking, but my sore muscles and the still blistering hot weather made me think instead of a relaxing afternoon in the pool at the Nest.
I opted for an hour in the pool and then went back to my very own house to dig through more containers.
Posted by Second Wind at 9:38 PM