Part III ~ Puzzles To Be Solved 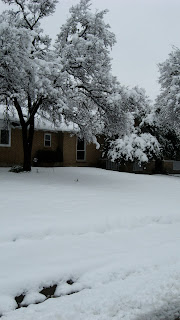 Chapter 62
When I opened my eyes early the next morning, the first thing I noticed about the new year was that it was extraordinarily quiet. I got up and tiptoed to the window — somehow it felt like I should — and was delighted to find while I’d slept my world had been transformed into a magical white wonderland. A soft thick blanket of sparkling fresh snow had changed the landscape into an unrecognizable terrain and muffled the normal sounds of morning. The winter storm I’d passed through in Central West Texas two days ago had made an uncharacteristic wide turn back to the northwest, depositing just over a foot of the white wet stuff across most of the plains above the Caprock. It had been cold enough the past two weeks that the snow was likely to stick around for a while.
Donning boots and jacket over my flannel pajamas, I stepped out into the crisp freezing air to refill the bird feeder and look for the morning paper. Miss Priss ran out the door as soon as it opened but halted abruptly at the edge of the snow. I laughed as the cat tested her footing, and then, sinking into the cold, white stuff, quickly jumped back onto the porch. 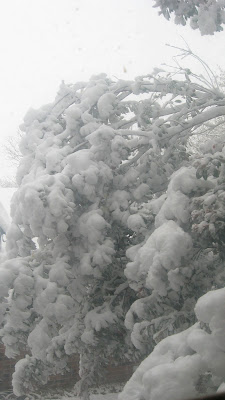 I drew in a deep breath, letting the invigorating air fill my lungs, renewing and refreshing me from the inside out. I liked to think God had made this special setting just for me, as a reminder that even if my heart was broken, the world could be beautiful. But I thought that might be a tad egotistical. I thanked Him, nonetheless. He could make everything right for me. I knew He could, and I hugged myself, content for the moment.
After providing breakfast for the neighborhood birds, I began to shiver, so Miss Priss and I returned to the warmth of the house — me to brew my morning tea and Miss Priss to find her litter box. As the tea brewed, I said to the cat, “Guess I can read the newspaper online later.” I hoped the paperboy had put double plastic on this New Year’s Day edition, still buried out there somewhere.
Standing by my front picture window a few minutes later, I was enjoying the serenity of the new year when I was startled enough by the suddenly ringing phone to spill my tea. As I brushed myself with a kitchen towel, I heard Sharon on the other end saying excitedly, “Remember our sophomore year when it snowed like this and we went to the open area by the Dairy Barn to make snow angels? Meet you there in 15?”
I laughed, “Make it 30 and you’re on, but bundle up, I’ve been out and it’ll freeze your spiked hair off!” 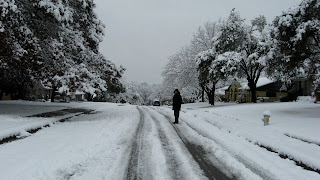 I decided to walk to campus, not wanting to chance driving the side streets if ice had formed under the snow. Curbs and sidewalks had disappeared. I was thankful for my wide-soled snow boots that not only kept me warm but also allowed me to walk mainly on top of the snow rather than falling deep into each step. And once I was moving steadily, the cold didn’t seem as bad.
I made good time, crossing 19th Street easily–there was no traffic yet. Spotting Sharon’s SUV in the deserted Hulen-Gates Residence Hall parking lot, just a few feet off the street, I said, “Uh-oh.” It looked like Sharon’s car had hit the hidden curb, spun out and was wedged up against a snow bank. Great, we’re going to have to dig her out, I thought as I heard my friend call my name from between the buildings ahead. Eerie how far the sound traveled in the hush of the snow.
“Maggie! Come see! I’ve already started a snowman. This is perfect packin’ snow!”
I joined her in the open area near the old Dairy Barn, just west of the library, and smiled with delight at the immense open field of glistening virgin snow ... well, almost all untouched because Sharon had indeed “started” a snowman that was already almost as tall as her fuzzy red earmuffs. “I couldn’t wait! Isn’t this glorious? I feel like a kid again!” she beamed.
I laughed, agreed, and we spent a happy hour perfecting Mr. Snowman, building a family for him, including a dog that looked more like an armadillo, and making snow angels everywhere we could. Our noses were red, our cheeks were glowing and our clothes covered in snow, but we were oblivious to everything except our fun. It was as if God had picked us up and set us down in a world all our own. Sheltered by the empty buildings and surrounded by frozen white crystals, the only sounds were the crunching of snow and the muffled ripple of our laughter. We were 30 years younger and giggling at the slightest joke or statement, or just at the joy of being alive and together.
Standing up to admire my latest snow angel, I declared it positively, absolutely the best one yet... and took a snowball hit directly in the back of the head, portions of it sneaking down my neck between scarf and jacket. Brrrr! Sharon whooped in joy at her excellent aim.
Turning quickly and ducking, knowing a second missile could be on its way, I scooped up a handful and formed my own weapon, wheeling around to fire it at my friend. Halfway through my delivery, I stopped, frozen in place by the sight of a tall figure coming around the far corner of the building.
Anticipating the retaliatory shot, Sharon had ducked and turned away, also discovering the intruder walking determinedly toward us. She stood and watched Colin’s steady approach.
I’m not sure how to tell you what happened next, so I’ll think about it and relate it all next week.
Posted by Second Wind at 9:26 PM