With hugs and tears and more hugs, I said my goodbyes last night at Ben’s house over dinner. Sharon arrived yesterday morning, so joined us for dinner. Such horrific pictures of the earthquake and tsunami in Japan. We prayed for the people of the devastated areas and are still hoping the nuclear power plants can be contained.
An earlier call to Michael in Portland put to rest any fears for their safety. They are miles from the Oregon coast and high up on a peninsula above the Columbia River where it meets the Willamette River.  Hard to image the power of an earthquake that can send waves clear across the Pacific. Maybe my neighbor is right, and we are in the end times?
At any rate, we had a tearful goodbye. I’m not sure the granddaughters understand yet how far away I will be. I will miss them terribly.
We headed out pretty early this morning, right after the moving van took off. It’s scheduled to arrive in Lubbock on Monday. Sharon and I will make the trip in one day.
It took us less than an hour to get to the western edges of Fort Worth on Interstate 20, where civilization disappears in favor of rolling hills and ranch land. It’s as if the sky becomes clearer. Is this the way the pioneers had seen it?—except for the fences and billboards blighting the landscape, of course. But still, as I looked out across the massive fields of bluebonnets and wildflowers, I thought it had been far too long since I’d driven outside city limits. Enjoying it, I wondered why.
Passing through the settlement of Weatherford a half-hour later, we started a gradual climb to higher elevations, driving close to small towns and gentle hills, always up and almost due west.
Just before Abilene, the halfway point, a light rain enveloped us in a cloud of dreary weather, and we stopped to top off the tank and stretch our legs. I was disappointed I couldn’t see much of the passing countryside through the gloom. It’s been almost twenty years since I’ve driven instead of flown to Lubbock, and I’d hoped to see a few familiar landmarks. If the rain kept up, it would be a less exciting drive. At least Sharon was here to keep me company.
We made a quick trip inside a small travel station to use the facilities and purchase snacks and sodas. Sharon took the wheel, offering to share her peanut butter cheese crackers with the stipulation I would share my corn nuts.
Why do corn nuts only taste that good on the road? Jim brought a large bag home one day years ago and it just sat on the shelf. Yet when we travel, we fight over every last kernel.
We sipped ice-cold Dr Peppers and continued our journey.
As rain clouds cleared near Sweetwater half an hour later, I scanned the landscape, noticing fairly flat farm and ranch land to the north on my right, with huge fluffy clouds rolling across the sky as far as I could see.
“Look, Phelps,” I said, delighted at the late-morning sun sparkling off the puffs of white. “It looks like Georgia O’Keeffe’s painting Sky Above the Clouds*—only upside down.”
“If you say so, Maggie,” Sharon said. I could tell she was desperately trying to recall the painting. She was an engineering major, I knew, not an art lover like our friend Carol, who would undoubtedly be familiar with both painting and painter. 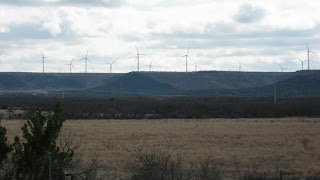 Looking ahead and to my left to see if the clouds continued in all directions, I was struck by the dark ridge of a long, low massive plateau to the south, extending west, parallel to the highway. Noticing movement on the ridge of the mesa, I squinted. “What’re those things moving out there on the hills?”
Sharon glanced over, then focused back on the road. “Wind turbines. The newest form of energy.” “There sure are a bunch of them,” I said frowning, looking west and noticing dozens of them as a far as I could see. “When did those go up?”
“A few years ago. But wait a couple of minutes because just up the road, on the other side of Sweetwater, you’ll be amazed.”
Sure enough, as we crested a large hill several miles further west, I was indeed amazed, and when a few miles after that we turned north onto Highway 84, I was dumbfounded. Dozens and dozens, if not hundreds of the enormous white wind turbines dotted the landscape in every direction. They were nothing more than tall tapered metal poles seemingly growing straight up out of cement ground-collars, with a motor at the top sporting three long, thin, slightly twisted blades, most of them turning. At least they looked twisted, from my perspective. I squinted to look closer. Maybe they were just tapered, but they did come to a smaller curved point.
We’d reached the eastern edge of the plains of West Texas, and we could see the turning giants for miles all around us, some less than fifty yards from the highway. They were irregularly spaced, often less than a tenth of a mile apart. I uncovered the Volvo’s sunroof—bad idea since it had recently rained and we got liberally dosed—and craned my neck to see the tops of the nearby blades as they spun in the wind seemingly directly above the car.
“Wow,” was the only thing I could think of. We were passing to the east of the small town of Roscoe.
Sharon said, “Yeah, they’ve put up thousands of these things out here in the past few years. Wind farms, they call them. We’re in the middle of the Roscoe Wind Farm, the largest in the country, I think. I hate them because they’re so huge and yet I love them because they’re better for the world than burning coal or foreign oil or using nuclear energy.”
“How big are they? They seem to block out the sky in some places,” I asked as I continued to stare at a scene that harkened to a science-fiction landscape.
“Yeah, blocking out the sky in West Texas is quite a feat, don’t you think? I remember reading where they’re anywhere from 200 to 300 feet tall. The blades, then, I would guess about 100 feet long. And the bases, let me think, I once heard that it would take almost 30 people standing shoulder to shoulder to circle the base of one — no, maybe it’s 30 children or about 25 adults? I don’t remember. Anyway, huge suckers, that’s for sure.”
“Guess they finally found a way to harvest the crazy wind out here,” I said.