End of Chapter 11
Father Murphy wasn’t the celebrant at the one early morning Mass I attended last week, and again absent at yesterday’s Sunday Mass, but the deacon did a pretty fair job of the homily, while the Monsignor presided at the altar. I like the atmosphere at Saint Elizabeth’s and think perhaps I have found a new church home.
In the middle of the week, Elaine sent a call into my office from “a priest.” Startled, I picked up the phone, puzzled until I heard the distinctive Irish brogue on the other end of the line. It took Father Fitzpatrick forty-five seconds flat to coax me into volunteering for the summer’s Vacation Bible School.
“Don’t ye know,” he said, “That Mrs. Bodecker, bless her soul, has been doing the same popsicle stick crosses nigh on ta twenty years, and me friend Father Joseph happened ta mention dat ye were right good at some rather progressive craft projects for da children when you were at Saint Mary’s.”
He added quickly, “Now don’t ye know dat wit’ yer important job at da university an’ all, meself is sure dat ye canna be ’ere every day for da morning classes come summer, but if ye could just give our teachers some new ideas an’ da like, it would be much appreciated, it would. Father Joseph himself assures me dat ’twill be an easy task fer someone as talented as yerself. Can you help me, do ye think, Mrs. Margaret Grant?”
I laughed—heartily. Every priest I’d ever known had an amazing ability to recruit volunteers, but Father Fitzpatrick might just be the best I’ve encountered.
And so, working with the church secretary to find out this year’s theme, gathering information on ages and numbers of expected children, a teacher workshop is now set up for the Saturday before the early June Vacation Bible School. Now all I have to do was figure out five projects for the week for each of the five different age groups. Twenty-five projects in all — and with an extremely limited budget, because, “We’re a wee poor parish, we ’ere,” Father had said pitifully enough.
Piece of cake, I thought rolling my eyes at my own gullibility, knowing I’d be opening my wallet. I’ll also be calling Carol, the real craft lady, for advice. I’ll need to visit the storage facility to dig out my supply boxes. And I’ll need to spend the next several evenings and weekends getting prepared to teach.  In the meantime, my day job keeps me pretty busy.
Chapter 12 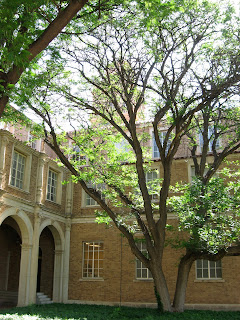 The Texas Tech University Board of Regent’s meeting, held monthly in the east wing second floor board room of the Administration Building, normally draws minimal crowds and the obligatory one or two reporters.
Friday, the room was crowded. Due, I knew, to persistent rumors about President Stone’s possible resignation announcement during the meeting. Heading toward the room, I unfortunately ran into Bennett Boyle.
Putting on a brave front, I smiled sweetly. “Mr. Boyle, what a nice coincidence,” I said as he frowned at me. “I have been trying to set up an appointment with you. Maybe we could talk today?”
“I’ve, um, I’ve been busy. You’ve only been here a week.”
“Three,” I said, looking at him sweetly.
“What?”
“Three,” I repeated. “I’ve been here three weeks and have been trying to get an appointment with you for three weeks.”
Looking uncomfortable, he ignored my statement and took another tack, “Why are you here now? You don’t need to be here. I’m covering the Board meeting.”
“Yes, I understand that, and I am sure afterward you’ll tell me if there’s anything I need to know, but seeing as how it’s a public meeting, I’m here to be part of that public.” I looked directly at him, silently daring him to object.
“It’s not necessary,” he said as he regained his composure.
“Perhaps not, but nevertheless, I’m here and intend to stay unless you absolutely forbid it. I’m meeting the Lubbock Avalanche Journal reporter, but I can certainly tell him you won’t allow me to be here.”
He looked at me hard, turned on his heel and entered the board room.
Gulping, I said a small prayer and followed him in, finding a seat next to Jake, the A-J reporter I had treated to lunch my first week here. I was glad he was there — we hadn’t actually discussed it.
To no one’s surprise, President Stone announced his resignation, effective at the end of the semester. I went immediately up to my office to get the word out.
Early this morning, I received a call from Boyle’s office asking to meet with the Chief of Staff after lunch.
“Will wonders never cease,” I said to Sharon over lunch. “He actually wants to talk with me.”
“More likely talk at you,” opined my friend. 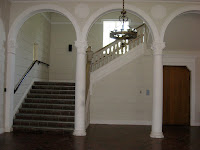